So, a little over a year ago, I was visiting my friend, Jessica, to help her plan her wedding - to be held in Ireland in September.  Well, it just so happened to be Pride weekend in Knoxville and we decided to go and check it out for a bit.  I hadn't been to Knoxville Pride, but I'd thought about several times.  I didn't know if I would ever find her, but since I had already tried, unsuccessfully, for so many years following our split, I just kind of handed it over to universe.  If I ever did see her again, then it would happen without me making it happen.  But if so, I knew exactly what I would say.  When we headed over to the World's Fair Site, the home of Pride 2016, I knew there was a slight chance of seeing her, but I didn't give too much thought to it.

We (Jessica, me, and Patterson) parked in the garage across the street and walked across the street where we ran into Jessica's fiancé, David. We all said hello and kept walking toward the gate.  Then we ran into my cousin, Deanna.  We walked in and grabbed a drink and decided to walk around.  As we walked, I noticed a VIP tent set up ahead of us on the left. We continued walking and then I kept focusing in on the tent and saw her sitting on a table scanning the crowd.  She's a great crowd scanner: me, not so much.  I immediately knew it was her. She suddenly looked at me and we locked eyes for a split send and I quickly put my head down, so my hair would cover my face and she'd be blocked from seeing my full face.  I was nervous.  I'd been waiting for this moment for more than 23 years, but I had to get it together. My thoughts racing, heart pounding, sweating, shaking, I sped up my stride to catch up with Jessica.  I would go talk to her and tell her what I've always planned, but I needed to put myself together.

As I tried catching up to Jessica, I looked behind me and there she was.  My lame attempt to keep her from seeing me had failed.  She was walking (with a purpose) straight in my direction.  My cover blown, still nervous, I turned and headed in her direction.  We both stopped in front of the other. "Hey! I said.  I've been looking for you!" "Yeah?" she asked and then proceeded to remove my sunglasses. "Yeah!" I said, "Every time I came to Knoxville, for many years, I'd try to find you. I even went to the Carousel (a bar that's no longer open we both used to frequent) a few times and ran into some mutual friends and asked them to give you a message for me.  Did you ever get it?" "No, I don't think I did," she replied.  "Yeah, I have been trying to get in touch with you to apologize for everything I did. I figured there was no way you'd ever want to see or be in touch with me ever again, but I needed to apologize." She just looked at me and said "It's okay, I wasn't even sure it was you, that's why I walked over here." Even though I had apologized and it appreared she accepted and brushed it off like it was nothing, I was still in some sort of shock.  I didn't know if she wasn't listening to me, or wasn't sure if I was sincere, or what, but then she just began talking - almost nonstop. So, saying what I had been needing to say for 20+ years, I shut up and listened.  She gave me a quick update of her current life, asked if I was in a relationship, (to which I replied, "Nope:They don't seem to work out too well for me"), asked what I was doing in Knoxville, asked how Shane and Shelby were doing, and just kept on and on. She invited me over to the tent to meet her partner, which I agreed and started following her. As we walked I asked to stop and get a selfie (because I never knew if I'd ever see her again).  She agreed.  I also asked her for phone number or email, because I'd like to stay in touch.  She started to tell me her email address, but I handed her my phone and let her type it in, (just in case I got it wrong, or if she didn't want me to have the real email address). She typed it in the notes section on my phone and we continued to walk toward the tent. I was going through a mental checklist of what I needed to make sure I could get in contact with her.  "Are you on Facebook?" "No," she said as we reached the tent.  Then she introduced me to her girlfriend. I shook her hand and looked at her and smiled, but I honestly have no memory of what her face looked like.  I do remember thinking that it seemed an odd match, but the thought was fleeting.

We then turned back to each other and continued to talk for a short bit.  I told her that I would bring my friends, Jessica and Patterson, over so she could meet them.  She agreed.  We started to part and  hugged each other. Tightly. As I brought her body closer to mine, she did the same. I felt her pull me into her just as much as I was pulling her into me. We both felt it and I knew it.  She started to release me but I didn't let go. I pulled her in as much as I could and pushed everything I was feeling into her. As she responded by returning to the hug, I knew I was putting myself out there - serving myself up to her on platter. I was going to have to be okay with whatever the result of that was. We separated and I put my sunglasses back on and reminded her that I would be over with Jessica and Patterson soon.  She acknowledged me then left and went back to the tent.

Oh my, oh my, oh my! I could barely contain myself and stay in the moment.  After all these years, it finally came true.  I found my first true love.  My first (adult) same-sex relationship. The partner who helped me care for my son and helped me bring my daughter into this world. Shelby's middle name, Ann, is from Darlene's first name, Anna.  When Darlene and I first got together, way back when, I didn't even know I was pregnant.  There's lots to go into how our relationship ended back then, but I'll save that for later. I finally found her though! Wow!  Now what?

So, I did what any reasonable person would do.  I sat down and immediately typed her an email, letting her know how much I had been waiting for that moment and included the selfie.

I'm so glad we got to see each other. I really needed this. There's so much I want to say but maybe it's best to leave things unsaid: I don't know...
You look good. Congratulations on your career and future fiancé. I wish you the very best and many, many years of happiness.If you ever want to talk, find yourself in Atlanta, or just need an ear, don't hesitate to reach out to me.You have, and always will be, my first true love. And I know you know that.--Paula 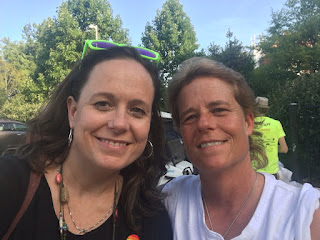 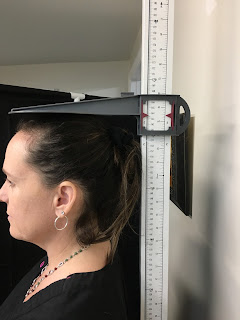 By the way, I'm working on a blog that's at least a year overdue.  Stay tuned, if you wanna know the latest in my world.  Meanwhile, go measure yourself.  You might be surprised of the result.